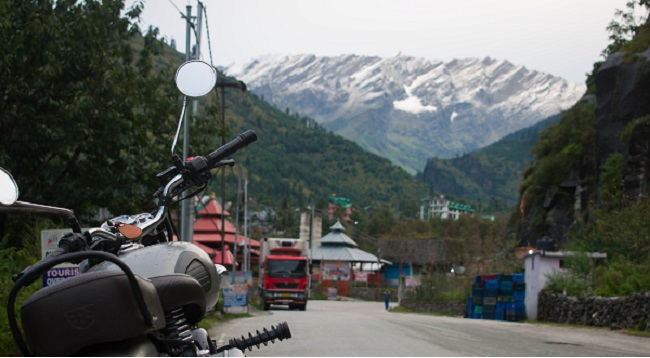 While Manali was sleeping, I woke up to the burble of the gushing river and though, lazy as I am, some comforts have to be sacrificed to experience the wonders of this beautiful world.

At a height of 13,058 feet, Rohtang Pass connects the Kully valley to the Lahaul and Spiti valleys and the highway to Ladakh. Notorious for it’s treacherous roads and erratic weather, every turn on the ascent is but a frame worth absorbing; reminding of the paradise of our dreams.

Also read: To the temples below water

It was one of my most adventurous rides. It was rainy and I was riding through the clouds. The roads were broken and weren’t visible for more than 10 metres. Even less sometimes. The slope was steep and the rush high. I happened to skip the yellow stone landmark until I finally discovered the change in tilt after a few kilometres. And there I was at 0800 hours, all alone taking in as much as I could. Sighing with delight and amazement.

More of biking:  Riding through the wildlife sanctuary and the most haunted fort

I might as well let the pictures do the talking.

I rode at dawn in mid-September and believe that there absolutely cannot be a better time than when you own the roads to yourself and do not have to listen to honks of cars filled with the city crowd.

Note: Monsoons are a risky affair and the hills are prone to landslides.

Only a biker knows why a dog sticks his head out of a car window.

Read and know more about my ROAD TRIPS

MY TREKS AND EXPERIENCES

Named Raunak Airan, I am a traveller who is passionate about hiking and adventure; love travelling raw for the unmatched experiences and the unknown elements associated with it.